I find designing a logo to be a challenging part of a new project. I could pay someone to come up with something slick, but it seems absurd when a) I deal in images, and b) I want the logo to represent something of the personality of the site, ie my own writing.

Version one was all about emphasising the ‘rough’ nature of the site. A scribble. It gets the point across, but I didn’t think I could face looking at this every time I logged onto the site.

Version two was in a box. It had to be quite a bold line to show up at a small size, and this, together with the boxy shape of the box, meant I was never quite happy with it. I’d have tidied it up to be a square, but that wouldn’t have saved it. 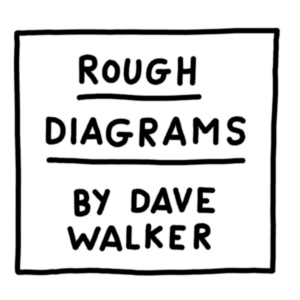 In order to slightly reduce the white space at the top of the site the next version lost the box and was more of a landscape shape. It didn’t really grab me, and wouldn’t have worked as an icon.

So, this is what I went for. In recent years my cartoon text has tended to appear in straight lines, but why not do something different? So, it’s a circle. Not terribly original and I’m sure lots of other people have similar logos (I’ve tried not to look so I’m not copying anyone), but it’s what I’m going with. For now at least.

Want to comment? You can do so in the following places:

How to wrap a present

I’ll get my coat